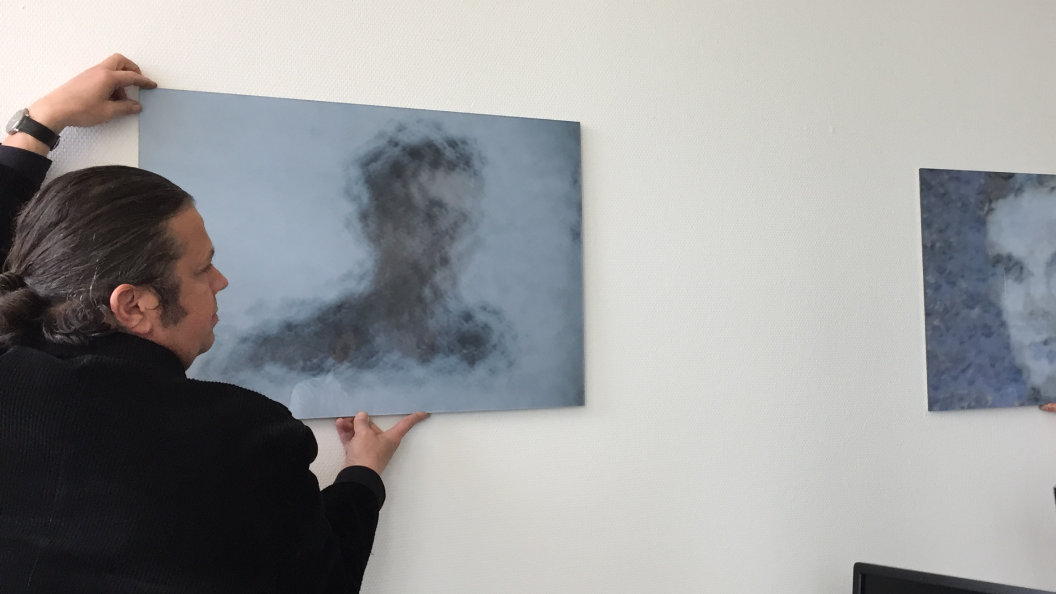 Like everyone else, software developers derive inspiration from the perspectives and thought-provoking ideas that a work of art is able to offer. The front-end experts among us even deal with aesthetic questions on a daily basis. This is why we at Yatta were looking forward to last night so much when Frankfurt artist Frank Kambor brought two of his artworks to the Yatta offices on Mainzer Landstraße. From now on, these two works will decorate our office walls - and inspire the Yatta team.

The blurring line between humans and machines

We are living in times in which Artificial Intelligence (AI), machine learning and virtual reality are progressing so rapidly that the boundaries between man and machine, original and replica, fiction and reality are becoming increasingly blurred. There are many areas where software imitates the real world perfectly – and even makes it more beautiful: voices and faces of real people, even human emotions that are based on algorithms often seem frighteningly real. In robotics, this phenomenon is known as the "Uncanny Valley". But one thing is certain: The imitation of reality through technological progress cannot be stopped.

This convergence of the real and the virtual world is addressed by the Frankfurt artist Frank Kambor in his work series "Verschwommen" ("Blurred"). He himself describes the photo compositions as follows:

"The new technology is increasingly determining our communication and organization, and ever faster and more perfect machines are being developed, which blurs the profile between man and machine more and more."

Thus, the works of the "Verschwommen" series could not be a better reflection of contemporary trends. They perfectly illustrate today's technology world with all its contradictions, promises, and ambiguities. At the same time, they indirectly add local color to the Frankfurt Yatta office, given that Kambor himself is originally from Frankfurt (more precisely, Bornheim) and a member of the artist community "Atelier 3. Etage" in Rödelheim. In his works, the versatile artist not only addresses the big questions of humanity. He has also photographed, drawn, and painted typical motifs of his city.

Frank Kambor is an artist who is deeply rooted in Frankfurt, but who at the same time thinks big. We are delighted to exhibit a small part of his oeuvre at our offices.