Hacking for a better city 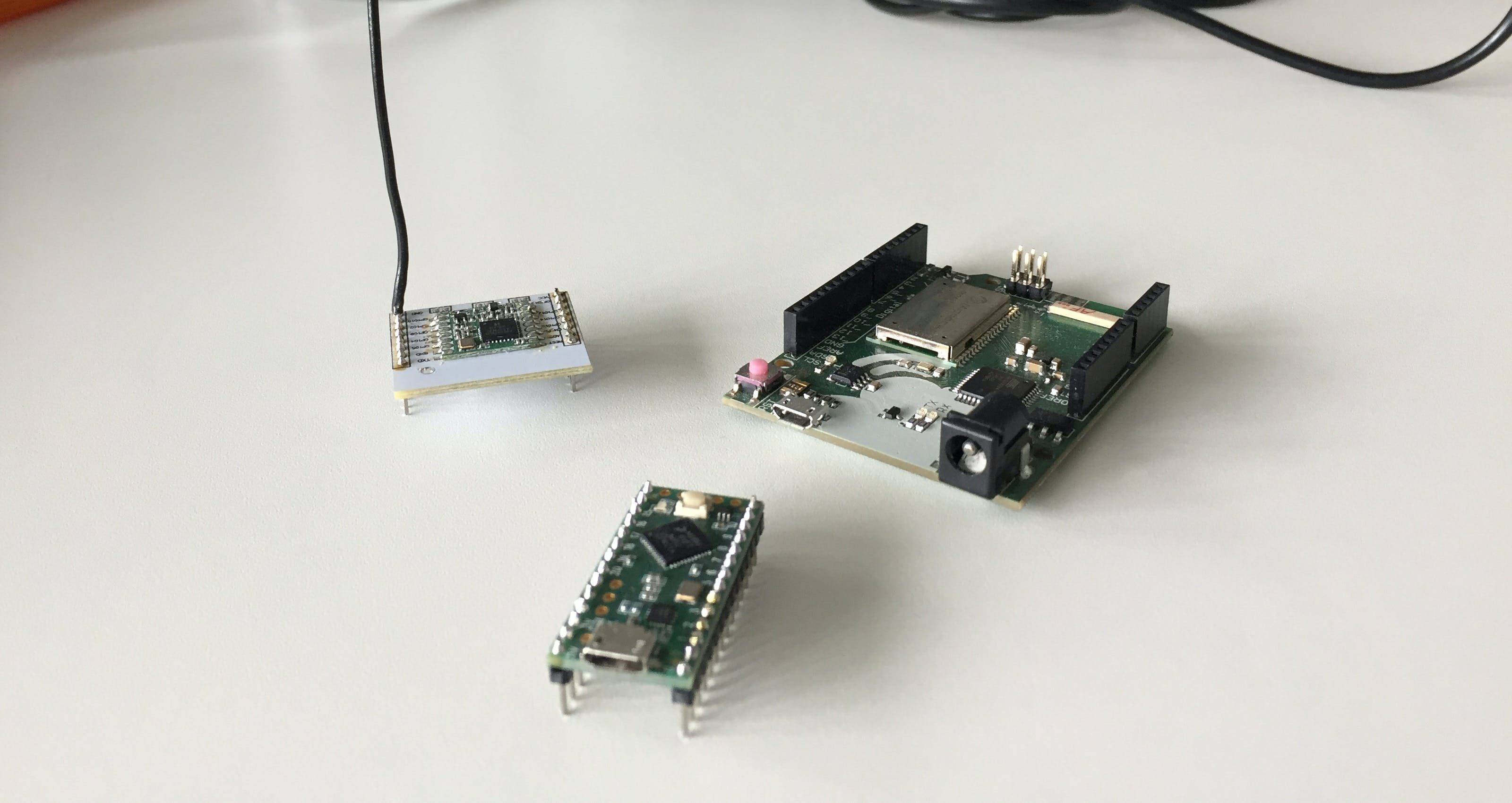 On 9 June 2017, the first workshop of the newly founded “Hack Darmstadt” community took place in Darmstadt.

Hack Darmstadt’s goal is to develop technology solutions — including software and hardware — that respond to the challenges faced by urban regions and cities today. The participants were inspired by the technical infrastructure and the philosophy of “The Things Network”. Based on this, they develop ways of measuring night-time noise or pollution levels. This also draws on the positive parts of the Internet of Things (IoT). We were part of the organizing team and accompanied the first successful Hack Darmstadt event last Friday.

The Things Network (TTN) is something like a grassroots movement within the global IoT community. The TTN manifesto, freely accessible on GitHub, starts with the following passage:

Everything that carries power will be connected to Internet eventually. Controlling the network that makes this possible means controlling the world. We believe that this power should not be restricted to a few people, companies or nations. Instead this should be distributed over as many people as possible without the possibility to be taken away by anyone. We therefore founded ‘The Things Network’.

In other words, whoever owns the network is in control. To make sure that power over technology and data does not fall into the hands of only a few people, organizations, or governments, the The Things Network Foundation strives to build a decentralized, open-source Internet of Things data network, powered by crowdsourcing: It is driven by the TTN community of the respective city. Instead of WiFi or LTE, projects use a low-bandwidth wireless technology called Low Power Radio Frequency (LoRaWAN). In addition to its low power requirements, this protocol allows devices to be connected to the Internet at low cost and independent of WiFi codes and mobile contracts. Under good conditions, ranges of more than 40 km have been measured. If shorter ranges are needed, Bluetooth 4.2. 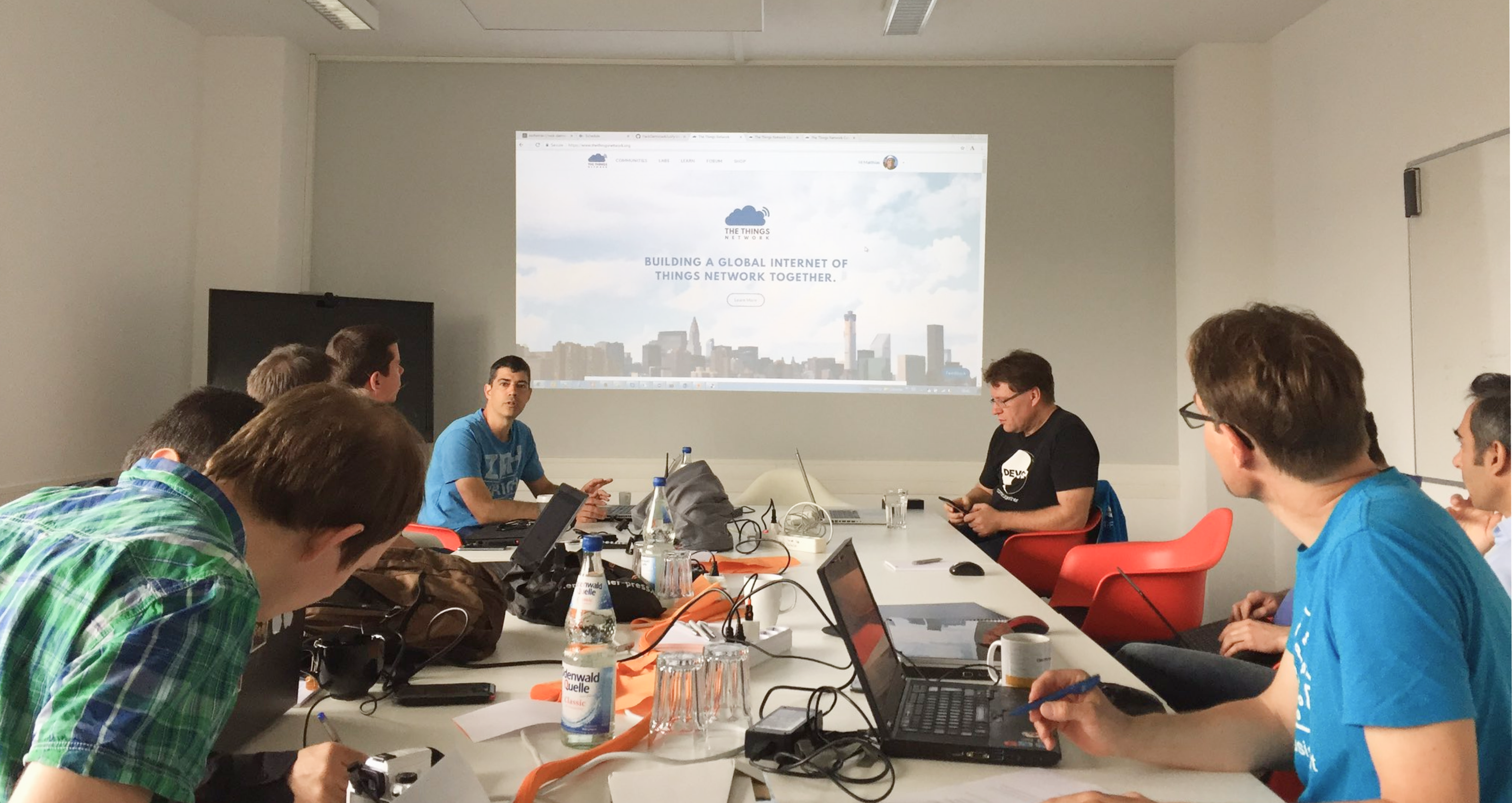 It all started in Amsterdam in 2015: Within six weeks, the local IoT community succeeded at developing a city-wide data network based on the TTN approach. Today, the TTN community spans the entire globe from Hawaii to New Zealand. Even in Frankfurt, there was already a small local group — but not yet in Darmstadt. Time to build a community! Many TTN gateways are located in Zurich. Therefore, it was no coincidence tha the hackathon “Make Zurich”, which also inspired “Hack Darmstadt”, took place in Switzerland’s largest city in February 2017. The makers of Make Zurich were also kind enough to provide the organizing team of Hack Darmstadt with a self-built gateway (feel free to have a look here and imitate it). In addition, LoPy-based nodes were used in Darmstadt, and apart from Python, Java was the programming language of choice.

After a brief introduction to TTN , LoRaWAN technology, and the IoT protocol MQTT by workshop instructor Matthias Zimmermann (BSI Systems Integration AG), the Hack Darmstadt participants were ready to get their hands dirty. But getting started is not always easy when you are a software developer, and you need to wire the hardware together before you can program it. At least the gateway was already set up. The nodes, however, turned out to be the first entry barrier for some participants. But after about half an hour, everything was all set, so that the hardware could be connected to the TTN backend, and the first LEDs started blinking. Every (visible) success triggered happy shouts of “eureka” in the room. Participants’ motivation increased further after each challenge and culminated in first experiments with light and sound sensors to measure the ambient light and the sound level in real time (see video below). These are the first steps toward collecting relevant data in inner cities Nearly everything has been documented on Twitter. All demos are accessible for free via GitHub.

At the end of the day, the workshop participants discussed possible next steps: potential gateway locations in Darmstadt and use cases for the nodes such as measuring air particles, temperature, and noise levels at different locations around the city. Despite the overwhelming response online and the support of several companies, the (offline) community is still in its infancy and looking for participants and supporters. A follow-up hacking event is planned for later this year. Even a two-day hackathon, as originally planned, is thinkable, provided there are enough registrations. So check back on their Twitter once in a while and stay tuned for more Hack Darmstadt!